Two events were held in September 2017 to celebrate the formation of the Sussex Conference which then became the Sussex Federation of Women's Institutes and was the first County Federation to be formed even before the National Federation.

Lady Denman Remembered
On 21st September a special event was held at the Victory Hall in Balcombe to install a blue plaque in memory of Lady Denman the first Chairman of the National Federation of Women's Institutes who lived at Balcombe Place and was the driving force behind the establishment of the hall after the end of WW1.  She was a member of Balcombe WI formed in 1917 and the afternoon was also a celebration of their 100th Birthday.

On 5th September, exactly 100 years to the day of the first Sussex Conference, East Sussex Federation hosted an afternoon tea, attended by members of West Sussex, in the grounds of Great Ote Hall in Wivelsfield courtesy of Carola Godman Irvine the owner of Great Ote Hall.

Celebrations for 100 Years of the WI

The Centenary Baton arrived in West Sussex at the Victory Hall in Balcombe on 6th January 2015 and visited various WIs during the week before being handed on to Hampshire on 13th January. 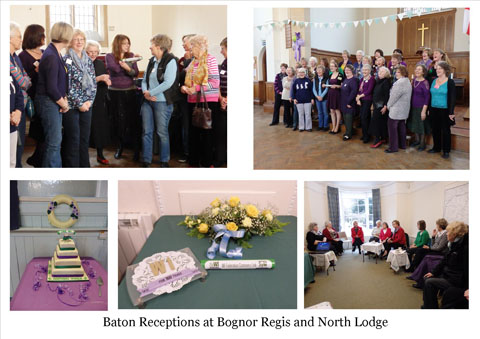 A "Picnic in the Park" held at Arundel Castle was attended by hundreds of members on a very wet and windy day in May.  In true WI style they celebrated 100 years of the WI and were entertained by Henry VIII and a Jazz Band.  Many members enjoyed a walk round the Earl's Garden when
the rain ceased and the sun came out when it was time to go home! 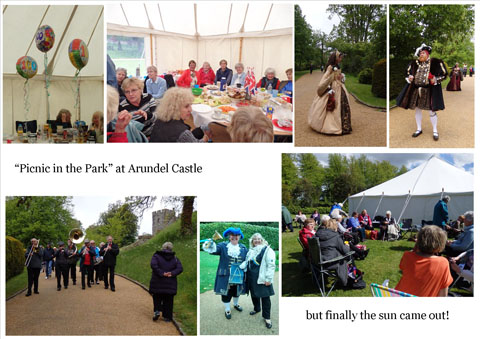 A Centenary Festival of Flowers was held in St. Paul's Church, Chichester in July.  Here are some of the beautiful arrangements donated by various WIs.  Tea and cakes were also provided for visitors. 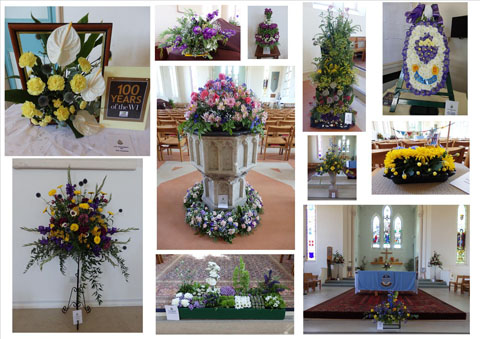 Mary Gwynn, author of the new WI Cookbook, talked  about her research into the writing of her book and then signed copies for members who attended the event held at Boxgrove Village Hall.  Samples of some of the recipes were available for tasting and a celebratory glass of Bucks
Fizz rounded off the morning. 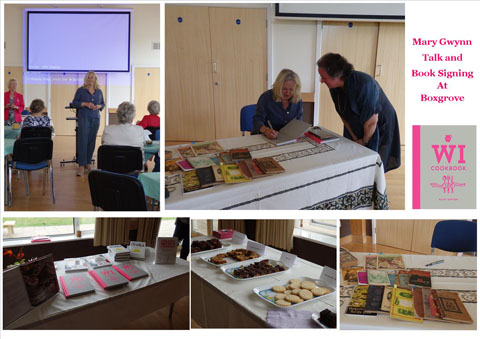 At the beginning of September members enjoyed a Centenary Lunch at Boxgrove Village Hall cooked by a small masterclass of members under the leadership of Maggie Borsberry. 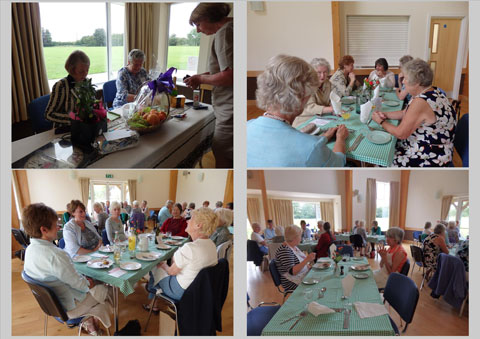 Singleton and East Dean WI was the first WI to be formed in England in November 1915.  To celebrate the Centenary of the WI they put on a wonderful exhibition in the Gridshell at the Weald and Downland Open Air Museum at Singleton on 8th September 2015.  WIs were invited to enter
an exhibit depicting the year they were formed.  A walnut tree was also planted in the grounds by Jane Probitts representing the National Federation of WIs. 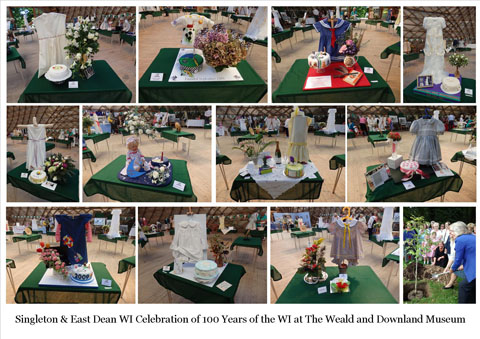 A Centenary Concert held at the Assembly Hall, Worthing entitled "The Sleeping Giant" illustrated the history of the WI throughout the 100 years. The Federation Centenary Choir was led by Aedan Kerney.  Also performing were Brass Fusion and Sidonie Winter.  This original piece was written by local actress Charlie Olsen.  Archive images were projected behind the choir to revive memories and enhance the drama.  A truly wonderful evening. 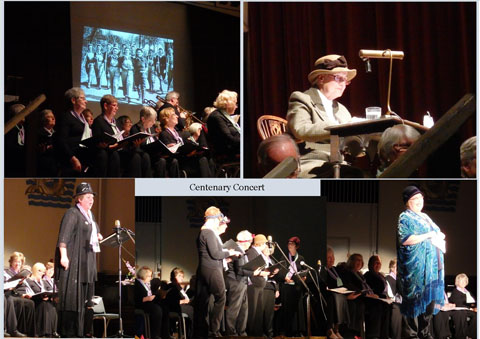 In the Centenary year we were delighted to welcome two inspiring guest speakers to our Annual Meeting held in the Assembly Hall at Worthing.  Helen Sharman spoke about her journey into space as the first British astronaut and Julie Summers, author of Jambusters, spoke about the work of the
WI in the second world war and the impact on women's lives following the return of the servicemen.
We were also very pleased to welcome NFWI  Chair, Janice Langley, who is also a member of Worthing WI to join us for this special meeting. 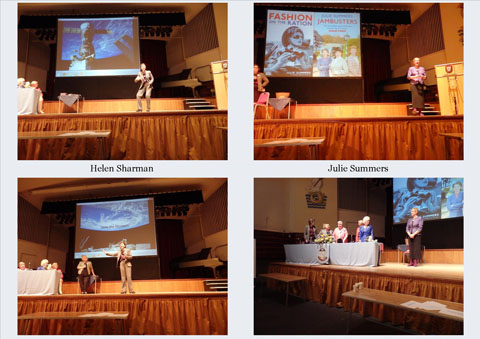 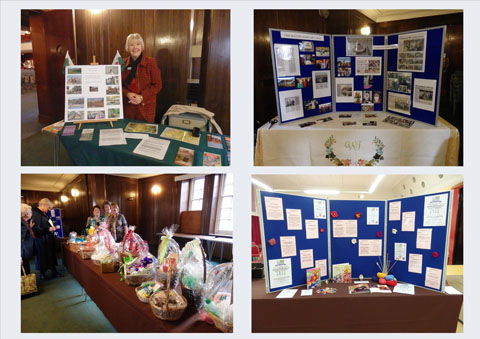 In 2019 the Centenary of the West Sussex Federation was celebrated

These are some of the events held during the year.

An Afternoon at the Races
Thursday 16th May - Fontwell Racecourse

Yvonne Price, Federation Chairman hosted Lynne Stubbings, NFWI Chair, members and guests in the premier lounge overlooking the finishing post.  A buffet lunch and afternoon tea were served and everyone enjoyed an exciting afternoon.  The race sponsored by the Federation was won by a horse owned by a WI member!

Members, husbands and friends enjoyed a wonderful evening of music at Clair Hall, Haywards Heath in March with guests from neighbouring federations, the High Sheriff of West Sussex and the Deputy Mayor of Haywards Heath.  The evening began with the West Sussex Music Youth Big Band a talented group of young musicians and was followed by young baritone Henry Godwin who at 15 years old has his sights set on becoming an opera singer.  The evening concluded with the Worthing Steel Band who had our feet tapping and many members dancing in the aisles.

On 16th March a group of members, selected by ballot, braved the weather and gathered at Northwood near Slindon to plant 100 oak trees donated by West Sussex WIs.  These will become part of the new woodland that will grow up replacing those cut down for timber 100 years ago during the first world war.  An oak plaque marking the site has been erected and a Welcome to Northwood leaflet which contains a map can be picked up at Northwood Junction or The Forge at Slindon.  Some of the photos supplied by Ryan Mclaughlin.

Hosted by our Federation Chairman, Yvonne Price, members enjoyed a three-course meal at the Avisford Park Hotel, near Arundel. This was a splendid start to our centenary year.

The WI makes great cookies, but we also use them to give you the best experience on our site.

By continuing to use our website we will assume that you are happy with our use of cookies.